A veteran wildlife photographer contemplates the wonderful fauna of Kaeng Krachan, the kingdom’s largest national park and an Eden he knows well but also fears for despite its new World Heritage status

Situated in Phetchaburi province in Thailand’s southwest and encompassing 2,915 square kilometres, Kaeng Krachan was established as a park in 1981 at the urging of His Majesty King Bhumibol Adulyadej. It is covered by tropical rainforest—dry evergreen with patches of mixed deciduous, dipterocarp and bamboo. Given that it takes in a good portion of the Tenasserim mountain range that borders Myanmar, the terrain is extremely steep for the most part. However, trekking trails have been established for nature lovers and the park is well worth getting to.

A few Indochinese tigers still thrive here but the population has thinned out considerably, almost certainly because of poaching and encroachment over the years. When I was working in Kaeng Krachan back in 2003-2008, the striped cat was found almost everywhere I set a camera trap. Sadly that is not the case today.

The Phetchaburi River, which runs through the park, is simply an amazing waterway and in years past I was able to identify several individual tigers patrolling its banks. This iconic feline is without a doubt one of the most beautiful creatures in the world and Thailand is blessed to still have a population of the big cats. But their future is at risk.

Leopards, both yellow and black (melanistic) phase cats, also still make an appearance, as do smaller carnivores like the Asiatic bear, Malayan sun bear, Asian wild dog, clouded leopard, golden cat, fishing cat, marble cat and leopard cat. Civets, hog badgers and mongoose call the park home too, alongside smooth- coated otters. And fish species are abundant in both the Pranburi River and the Petchaburi, which even has a very rare Siamese crocodile living all by herself in its upper reaches. There are few images of this elusive reptile but I was lucky to catch her one morning as I sat, sweating profusely, in a photo-blind on the banks of the river. The creature swam right below me to the opposite side, giving me one of those lucky moments in my career.

Two types of monitor lizard, the water and the forest monitor, live here and many species of snake are common in the park. Among my favourites are the tree-dwelling snakes and I am particularly pleased to have captured some great shots of a beautiful green pit viper because they are so hard to spot in the foliage.

I’ve encountered all manner of snakes in Africa and Asia but I must admit it is always a bit unnerving coming face-to-face with a mature king cobra. They’re not normally aggressive and will usually try to evade humans if they can but on one occasion I literally bumped into one in my boat-blind and it reared up, hissing at me! Thankfully, while I mimicked a statue, the snake calmed down and went on its way. It was a heart-stopping moment but one I’ll never forget. 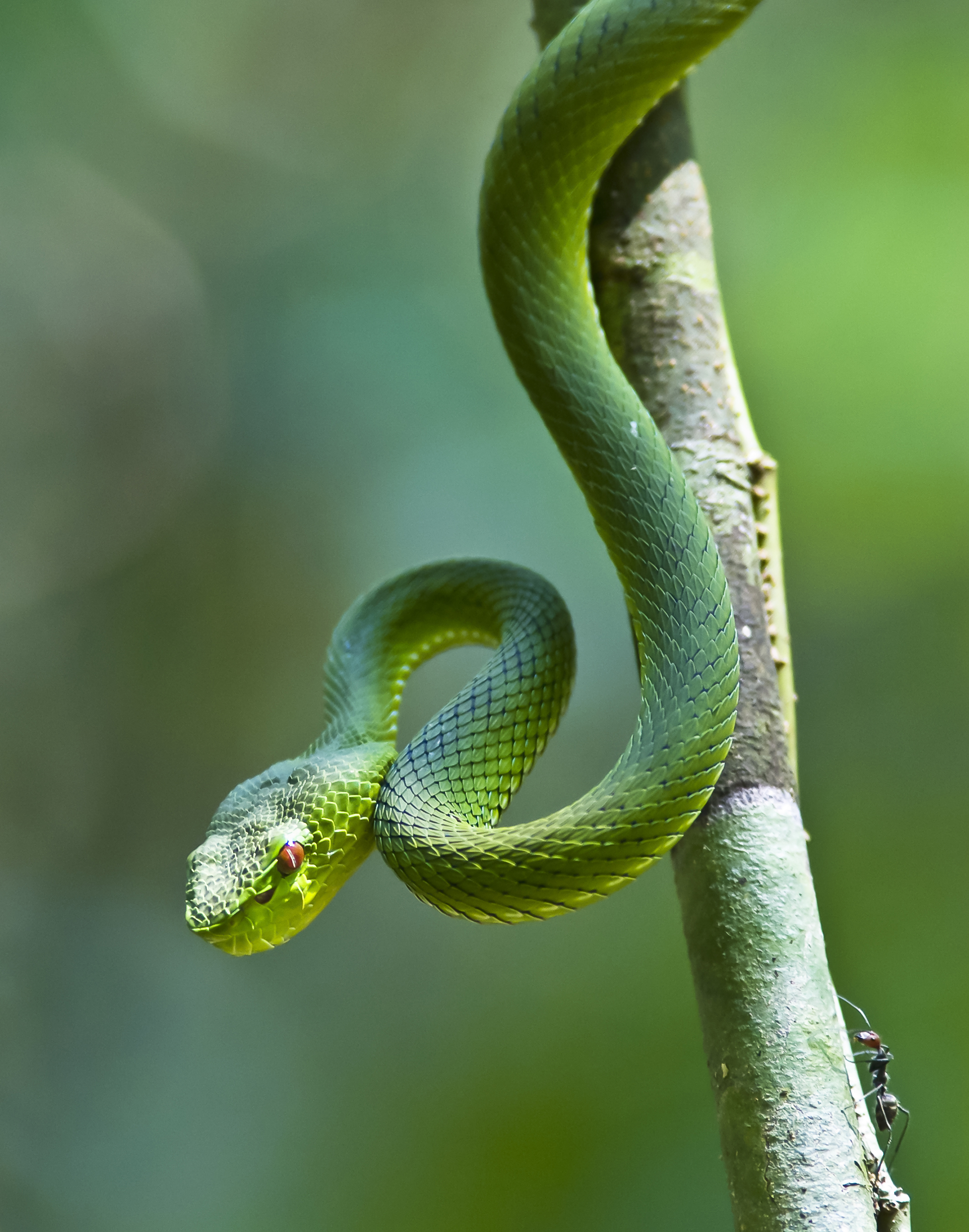 A green pit viper and a carpenter ant

Mineral deposits play an important role for the large mammals that include elephant, gaur, sambar deer, serow (goat-antelope), both the rare Fea’s muntjac and common muntjac (barking deer), wild pig and mouse deer. There are quite a few of these deposits scattered throughout the park, attracting both prey and predator species alike.

Poaching has had an extremely serious impact on the ecology of the forest, with mammals dispatched for meat and trophies and trees cut down for timber to build houses and boats. The tragedy is that the larger animals, like gaur, elephant and deer, play an important role in the dispersal of seeds that help to regenerate the forest, which in turn produces food and habitat for the wildlife. Prey species also make up a very important link for carnivores and keep the balance of nature intact.

Bats are common in the numerous cave systems that pepper the limestone mountains. Both insectivorous and nectar-eating species thrive here. These creatures are mainly nocturnal. They head out to hunt on the wing at night and only return to the cave at first light. There, thousands of them create huge mounds of guano-highly prized by locals as a crop fertiliser.

Primates in the park include white-handed gibbon, leaf monkeys, several macaque species and the slow loris. Gibbons can be heard from kilometres away as they call out in the morning when the sun comes out.

However, I have heard gibbons calling out in the late afternoon in other protected areas, which is not the norm. But fruit trees are prolific in Kaeng Krachan and all primates benefit from them. Certain birds and other ground-dwelling mammals such as gaur, deer, wild pig and some civet species also eat fallen fruit when the season is right.

Indeed, birdlife is good in Kaeng Krachan. Hornbills, woodpeckers, raptors and owls, plus hundreds of different species of smaller forest birds, all flourish. The rarest is the rachet-tailed treepie, known only to a few mountaintops in Indo-China. They are found up on Khao Phanoen Thung at 1,207 metres above sea level. In fact, the national park is one of Thailand’s top birding sites, visited by local and foreign enthusiasts alike.

Just a three-hour drive from Bangkok, the park is closed to tourism during the rainy season from August 1 to October 31 every year. But if you do head that way be aware that the road has recently been paved from the main gate at Sam Yot station up to Ban Krang ranger station (approx. 18 kilometres) and then it’s a dirt road to Khao Phanern Thung where there is a parking lot. After that, it’s another 4.9 kilometres on foot to the Phetchaburi River.

Plans by the Department of National Parks (DNP) are to open certain areas of Kaeng Krachan all year round but there has been much opposition by nature lovers and NGOs to this proposition. Overexploitation like this will always be detrimental to the natural ecosystems that should thrive here. Over-visitation is another problem, especially when camping grounds are filled to the brim during some national holidays. On such occasions, litter is left strewn all over the place and park staff are often still clearing it up days after the visitors have gone.

Walking trails in the forest become ‘trash trails’ when people with bad habits throw away water bottles, candy wrappers and so on. This is a perennial problem at all national parks throughout the country that needs to be addressed before everything re-opens. Based on experience though, my gut feeling is that it will be overlooked again.

This is a shame because, after years of trying, just this year in July, Kaeng Krachan was finally awarded World Heritage Site status, becoming the third such protected area in Thailand after the Huai Kha Khaeng-Thung Yai Naresuan wildlife sanctuaries in the west and the Dong Phayayen-Khao Yai forest complex in the east. The designation hasn’t been without controversy though because many areas of Kaeng Krachan have been settled by an ever-increasing population, which will slowly degrade the wilderness in some places to the point of no return.

The main problems facing the park and the Phetchaburi watershed relates to the management of the protected area and how its funding is used to protect this important place. If old regulations and laws governing it remain unchanged, it will be a rough road to extinction for many plants and animals. More funding, trained personnel and incentives are needed to keep poachers and intruders from damaging this beautiful but fragile ecosystem any further.

What is ‘Quiet Quitting’?

What is ‘Quiet Quitting’?