We get it if you’re a bit unsure of vegan ice cream. They’re certainly not all made equal, which is why we’ve decided to share our little list of the tried, tested, and loved. The following plant-based ice creams are locally-made in Bangkok and suitable for those with lactose-intolerance or people who just want to subscribe to that healthier, more ethical lifestyle without compromising on taste. No animals were harmed in the process of making these ice creams, although—disclaimer—they were tested on two writers. 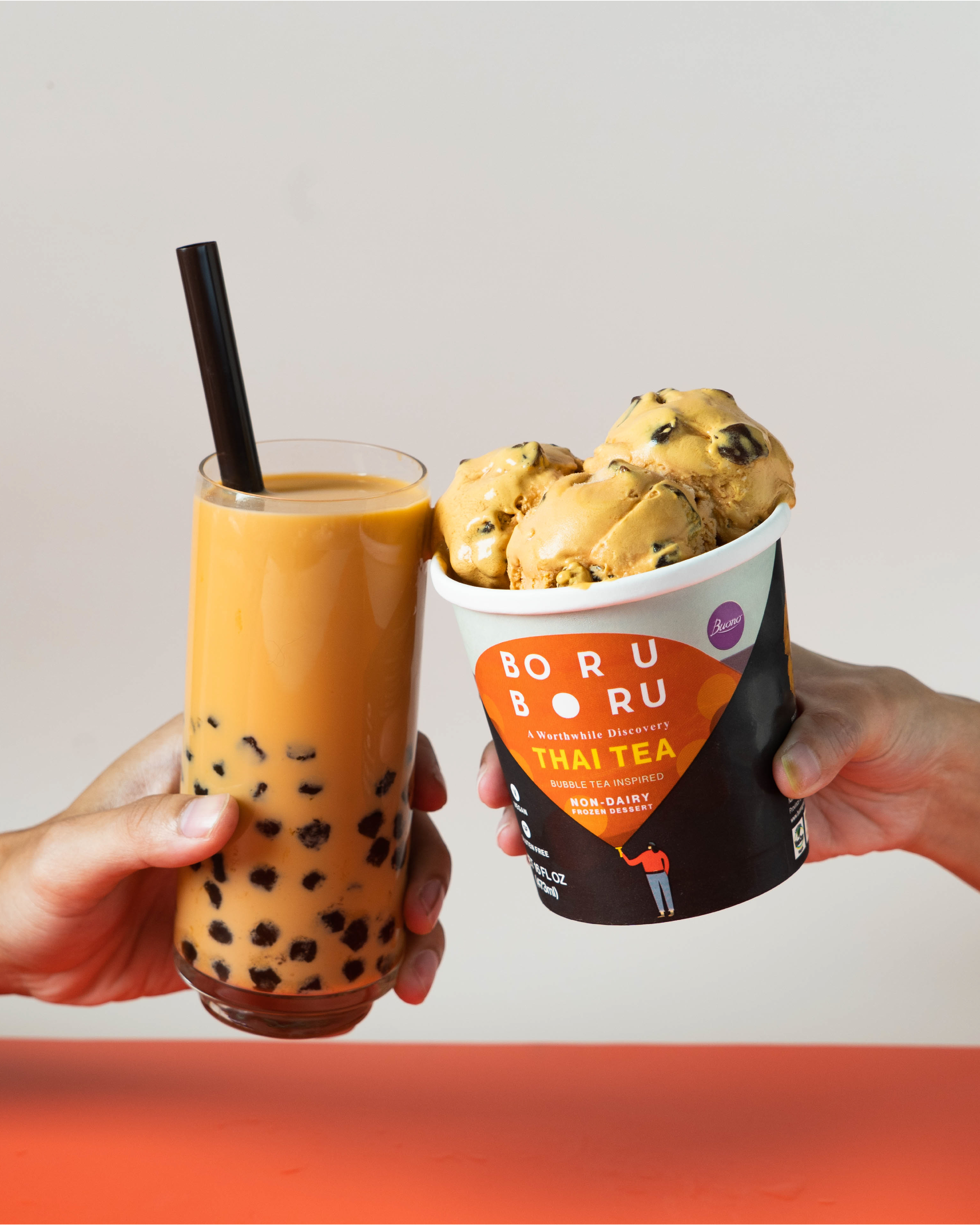 This gelato producer traces its origins all the way back to 2001 when its founders were first smittened by the taste of authentic gelato in Italy. They opened their business in 2002, but it wasn’t until 2017 that they made their range fully plant-based. Using coconut milk as their base, Buono produces a number of decadent flavours that you wouldn’t believe are dairy-free. Buono’s Coffee Almond Brittle is a crowd favourite, but we also can’t get enough of the bubble tea-inspired Boru Boru Series, which incorporate bits of chewy boba. The Kam Thai Series is another unique set of flavours based on Thai desserts. Whichever you decide to try, Buono is consistently deceptively vegan—in the good way.

Order via Lineman, Robinhood, and GrabFood (under “Green and Sunny”) or message Line Official @buonogelatoplus.

Named in memory of the ice cream maker’s late dog, Wua (meaning “cow” in Thai) uniquely describes their natural, plant-based ice cream as “wonky”. There is something so charming about Wua, not just in their sentimental and honest branding, but the fact that their rotating flavours are offered in limited batch and you have to keep up with their social media to find out what’s available at any given moment. Many of the creamy flavours, like Salted Caramel and Choc Chip, are made with a cashew base, which lends to a rich texture and neutral flavour comparable to dairy ice cream. Wua also makes incredibly refreshing sorbets that live in our memory rent-free. We can’t wait for mayongchid (Marian plum) and mangosteen season to be back, but mango is always great, too.

Order via Robinhood or message @wuaicecream on FB/IG. 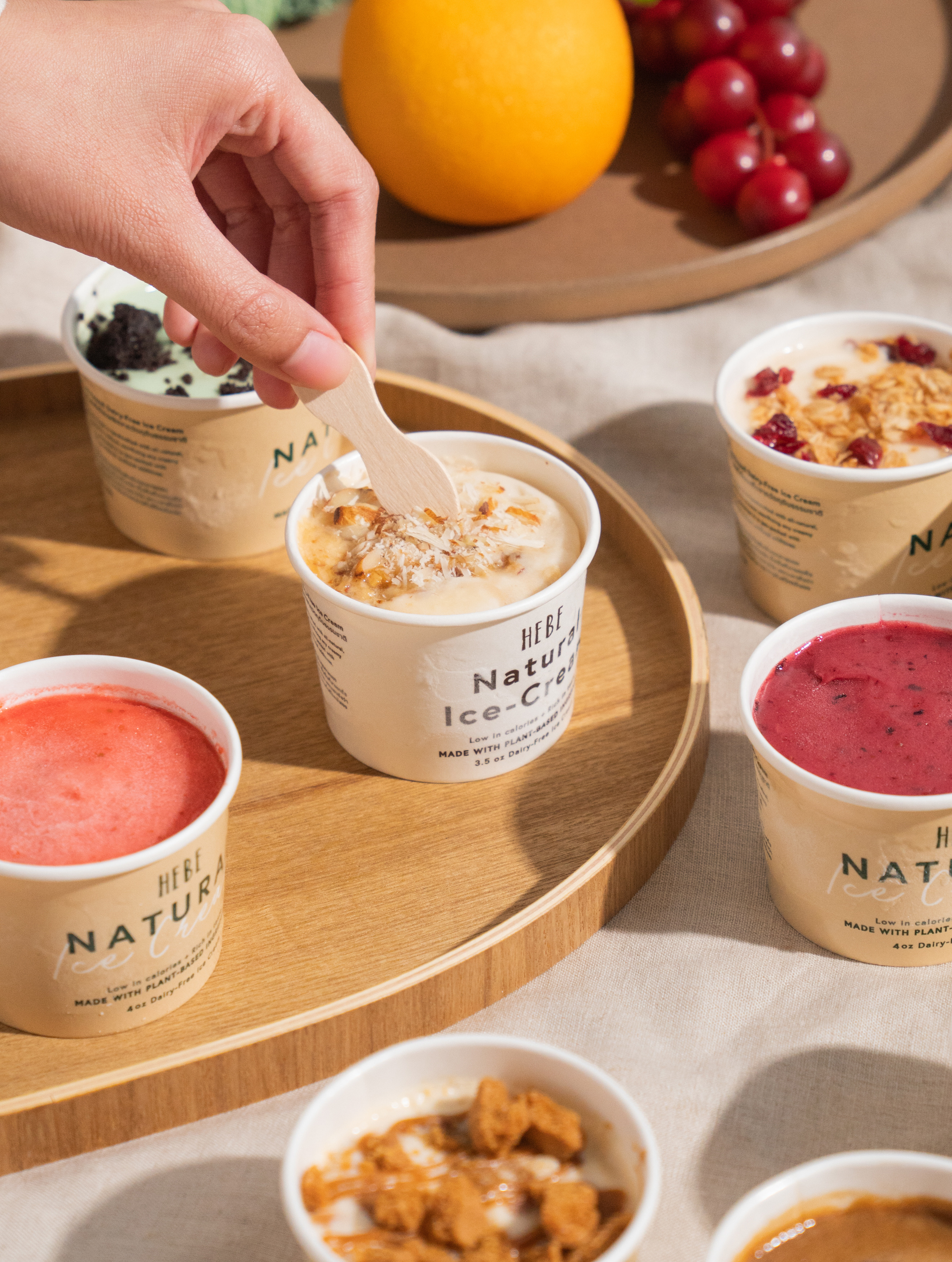 Hebe isn’t just vegan-friendly but also calorie-friendly without sacrificing on creaminess and taste. Using a variety of bases like rice, pistachio, almond, and coconut, they’ve experimented, mixing and matching bases with flavours, to find out which combos work best together. The coffee-flavoured Hakuna Ma Java, for example, uses both pistachio and oat milk. One of their flavours, Naked Chocolate, was voted Best Plant-Based Ice Cream by users on vegan news platform Root The Future, so if you don’t know where to start, try there.

Another maker of delicious coconut milk-based gelato, Veganisto caught our attention with their wide range of flavours, from that of decadent desserts like Banoffee and Lemon Cheese Pie to the Asian tea series highlighting Uji Matcha, Thai Cha-Yen, and one of our absolute favourites, Taichung Milk Tea. In continuously coming out with new, exciting, and often nostalgic flavours that pull on our heartstrings, Veganisto’s mission it seems is to make better alternatives for all our favourites so that we don’t really have a reason to go back to dairy-based gelato ever again. Current status: waiting for that Rum and Raisin to drop.

Order via Robinhood or message @veganistogelateria on FB/IG or Line Official @veganisto.