All photos by Chaiwat Kangsamrith.

Coincidentally, 1907 is a monumental year—for both Belgians and Thais—when it comes to comics. For Belgium, it is the year Hergé, creator of Europe’s most popular comic of the 20th century, The Adventures of Tintin, was born. For Thailand, it is the year the first known comic was ever published in the kingdom, in Wattana Wittaya’s school publication.

This unexpected revelation that the history of Thai comics actually dates back over a hundred years would not have been evident had it not been for Nicolas Verstappen’s recent magnum opus, The Art of Thai Comics: A Century of Strips and Stripes (2021), published by River Books. A magnificent tome that was six years in the making (five years of research, plus another year to write it up), the book chronicles and dissects the best and brightest masters of Thai comics, dating from 1907 to 2007. Earlier this May, the book had been nominated for the Best Comics-Related Book category at the Eisner Awards, an Oscars-level accolade for the comics industry.

As a lecturer and comics scholar currently teaching at the International Programme of the Faculty of Communication Arts at Chulalongkorn University, Verstappen had been working on his academic paper on the new generation of indie Thai cartoonists. When the faculty suggested that he add a chapter about the history of Thai comics predating 1997 to his paper, he would come across a trove of discoveries with a compelling breadth that warranted a book of its own.

Verstappen's magnum opus, 'The Art of Thai Comics: A Century of Strips and Stripes', published in 2021

“I thought it would be easy because I thought there wouldn’t be anything—because no one ever mentioned anything,” Verstappen laughs. “The reality is there are so many artists and comics that were forgotten because none of it was preserved. Comics from the past were usually destroyed by monsoon floods and bookworms. There was a vivid tradition before the ’80s, where comics were everywhere, in every format, size, and topic, reaching every class. It stopped when the pirated manga wave arrived in the country and wiped out the market within five years.”

Born in Belgium, Verstappen had grown up surrounded by his country’s rich comic culture not limited to Tintin and Smurfs. “It’s a part of Belgian culture that passed down the generations.” He explains how his love for comics began: “My grandfather gave his comics to my father and uncle, who then passed it on to us. It’s not considered a childish activity, and it wasn’t shameful to be reading comics as an adult. In fact, the comic bookstore I worked at for 15 years after graduating with my master’s degree saw mostly adult readers.”

For the 43-year-old, one of the most life-changing comics he read as a child was Yakari: Little Thunder's Secret, a tale of a Sioux boy and his lost pony. “I had an amazing childhood with a loving and caring family, so when I discovered that the rest of the world was not like my family, I became really anxious and scared of the violence in the world,” he explains. “Yakari was a really dark coming-of-age story where he was getting challenged, burned, and wounded, but I could deal with the violence at my own pace and process it because comics are static, unlike movies. Seeing the past, present, and future on the same page also gives you a sense of how things are interconnected. You come to understand the complexity of the world and darkness, which really appealed to me.”

“It’s not considered a childish activity, and it wasn’t shameful to be reading comics as an adult.” 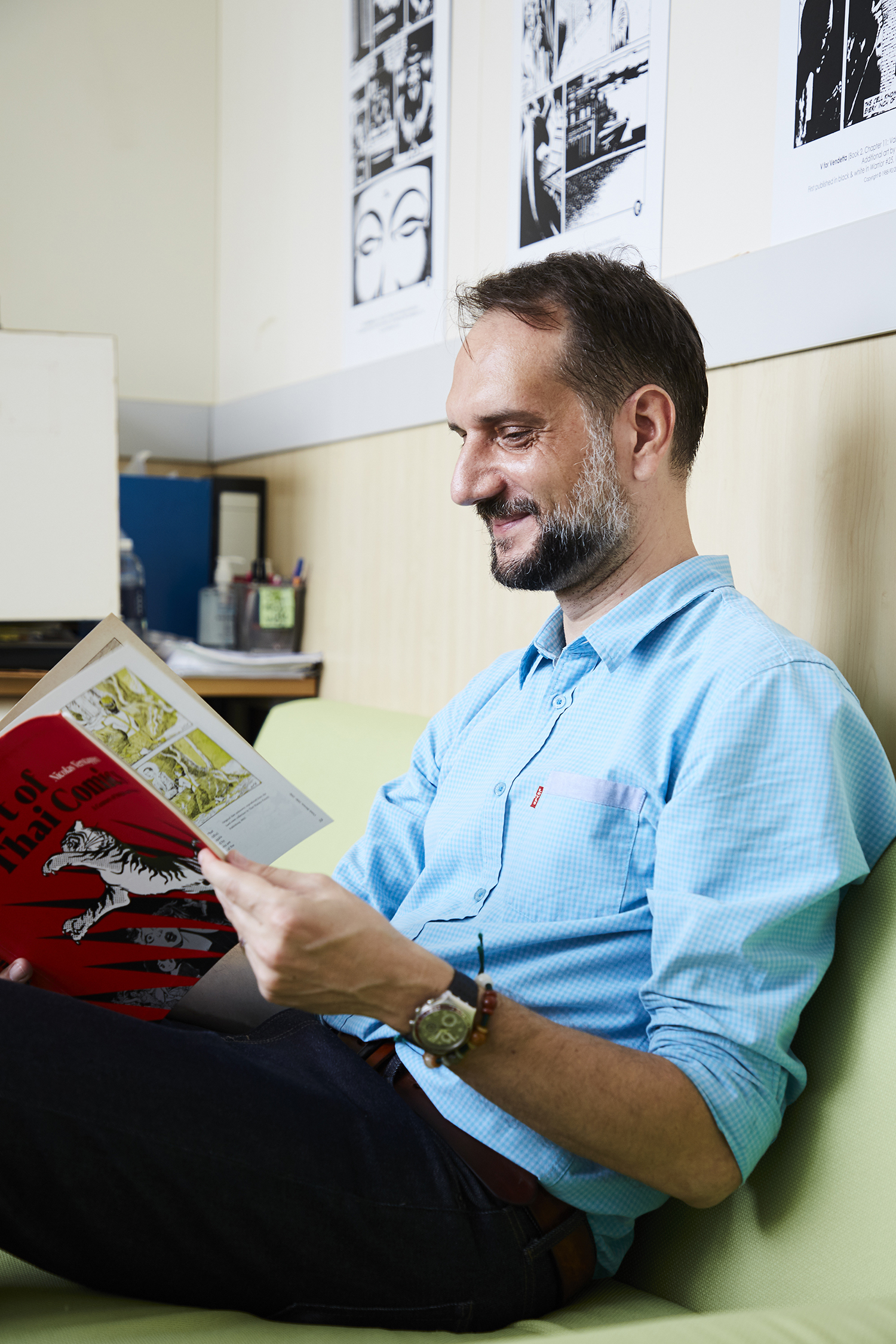 The professor enjoys reading comics when he's not teaching

He would go on to acquire his political awakening from groundbreaking titles such as Maus and V for Vendetta in his teens. Verstappen’s interest for comics and manga has no limits—so naturally, he makes it a point to check out local comics of any country he holidays at. As someone who studies comics academically and also reads for pleasure, he points out that what is most distinctive about Thai comics is how their emergence kicked off because of a king. “When King Vajiravudh went to study in England and discovered comics, he brought that back to Siam,” Verstappen shares. “He was a cartoonist himself and created contests, asking people to draw and send in comics to be published in the Dusit Samit Royal Gazette in the 1920s. It was completely unheard of that a king would be a promoter of comics, and it really started [to spread] at a national level.”

Save for that one-off woodcut comic from 1907, the 1920s saw an intriguing flood of comics, ranging from political satire to depictions of poetry. Thailand has had a long tradition of poetry that continued to survive in the form of comics, despite modernisation that threatened the art form. “This is very unique as far as I know, that a culture would actually keep all captions under the pictures in complete verses,” says Verstappen.

When political lampooning and critiques became too risky for cartoonists, following the revolution in 1932, they moved on to adapt classic folktales and literature into comics. One of the most popular characters from the 1920s-’30s was Khun Muen, a palace courtier who usually featured as a comical sidekick to princely heroes of Sawas Jutharop’s works such as Sang Thong. What is striking is how Khun Muen looks just like Popeye but is dressed in Thai attire. These hybrids became a constant throughout the decades, as Thai artists have long had a knack for mixing tradition and modernity to create something else entirely. Heroes of the late 1950s to ’60s were a literal copy-paste of Elvis Presley’s looks. Another quirky ’50s creation is Adirek Ariyamonthri’s Nu Lek Lung Krong, which features human versions of characters Mickey Mouse, Minnie Mouse, Goofy, and Uncle Scrooge. Throw on top of that a Fantastic Four storyline that the four characters encounter.

“For me, it’s fascinating to see how Thai artists choose what to borrow, what is working, and what they consider to be the trend,” Verstappen comments. “This is a reflection of King Rama IV and V’s process of civilising Siam in order to avoid invasion from the British and French. Thais have chakchak wongwong stories at their roots—where a hermit usually gives powers to a young prince so he can go have amazing adventures like in Phra Apai Manee. You’ll see artists keeping the plot but characters are dressed in American superhero attire in a Thai setting. It’s a strong statement that says our culture and old tales can survive, because we have superheroes too. Our roots, traditions, values, and cultural narratives can be resilient by selecting and adapting them to what is considered to be the trend in civilised places.”

Another spellbinding favourite of the professor’s are likay comics by Prayoon Chanyawongse, a figure considered to be the king of Thai comics. Literally bringing the theatrical spectacle of these free-form performances onto the page, characters would turn to readers to suddenly make political criticisms, before getting whisked off to castles and fighting monsters. Just like in real likay, where audiences and performers interact, gags included audiences in the comic booing at a hero deemed not good-looking enough and the leading man changing mid-performance. “They’re breaking the fourth wall by talking to audiences, and I’ve never seen this before 1939. Thais have used this technique even before Americans, which you don’t see until the mid-1950s in MAD Magazine.”

“The reality is there are so many artists and comics that were forgotten because none of it was preserved.”

Although the current state of comics in Thailand is far from its past heyday that saw as many as 200 million copies of one-baht cartoons circulating the country, recognition and acceptance are starting to pick up. According to the professor, before Covid, the National Library of Thailand had hosted an exhibition about Thai comics to highlight pieces from their collection—the first time a public institution has shone a spotlight on Thai comics—and within this year, the Holocaust horrors of Maus will also be translated into Thai.

Ultimately, Verstappen’s book had been written with the intent to be a bastion of hope for the new generation of Thai comic artists. “They feel lost, disconnected, and disregarded, but Thais have had comics since a hundred years ago, with lots of masters and artists who did amazing things,” he reminds. “You are part of a tradition, and you can be proud of that. I hope the book can be inspirational and motivational to show artists that they are a part of something bigger.”

Bangkok to see Cigarettes After Sex again in January

Confirmed: Harry Styles will be stopping by Bangkok on his 'Love On Tour'

Bangkok to see Cigarettes After Sex again in January

Confirmed: Harry Styles will be stopping by Bangkok on his 'Love On Tour'