Having been unable to venture overseas for the past two years, it was with much enthusiasm that, as we began 2022, I prepared for a long-overdue UK trip to see family, meet grandchildren, and proudly walk my youngest daughter down the aisle. I also began selecting the restaurants that would be packed into my trip. Those of you who share my passion for culinary excellence will nod, knowingly, when recalling extremely early mornings on table reservation platforms to secure sought-after bookings in London’s finest gourmet temples. The global culinary landscape is continually evolving with lengthier tasting menus, increased use of lesser-seen ingredients, a laser focus on dramatic presentation, and ever more complex cooking techniques. This somewhat hedonistic gastronomic junket would be about broadening my knowledge, by experiencing a new generation of innovative chefs.

As a lover of the classics, I did, however, succumb to a few traditional favourites, squeezing in timeless platters of foie gras grenobloise with Alain Roux at Waterside Inn, Brittany rabbit and Scottish langoustine with Claude Bosi at Bibendum, and highland Wagyu beef and Porthilly oysters with Clare Smyth at Core. All exceeded my sky-high expectations and undoubtedly confirmed their positions at the very pinnacle of the culinary pyramid. Following painstaking research, I chose a number of upcoming but equally celebrated establishments, where innovation is at the heart of everything their chef-magicians create.

My highlights began appropriately at world-renowned The Fat Duck, Heston Blumenthal’s landmark restaurant. Now in its 25th year, the Duck’s latest menu was to be a celebration of signature dishes, meticulously reproduced by recently-appointed head chef Oli Williamson, working alongside executive chef Edward Cooke. The experience was a journey into Heston’s world of curiosity—each dish carefully assembled, perfectly executed, and intelligently positioned to maximise impact, whilst ensuring every exquisitely-balanced element is there for a reason. This is creativity at its utmost, and the results were indelibly etched in my memory, both visually and on the palate: the Sound of the Sea, from 2007, triggered nostalgia of childhood trips to the beach; the vintage hot and cold contrast of Crab Risotto with Crab Ice Cream, created in 1998, as impactful today as it was back when savoury ice creams were unheard of; the somewhat kitschy but clever Black Forest Gateau, a 2006 masterpiece of emotional connection, a heightened combination of flavours and textures. 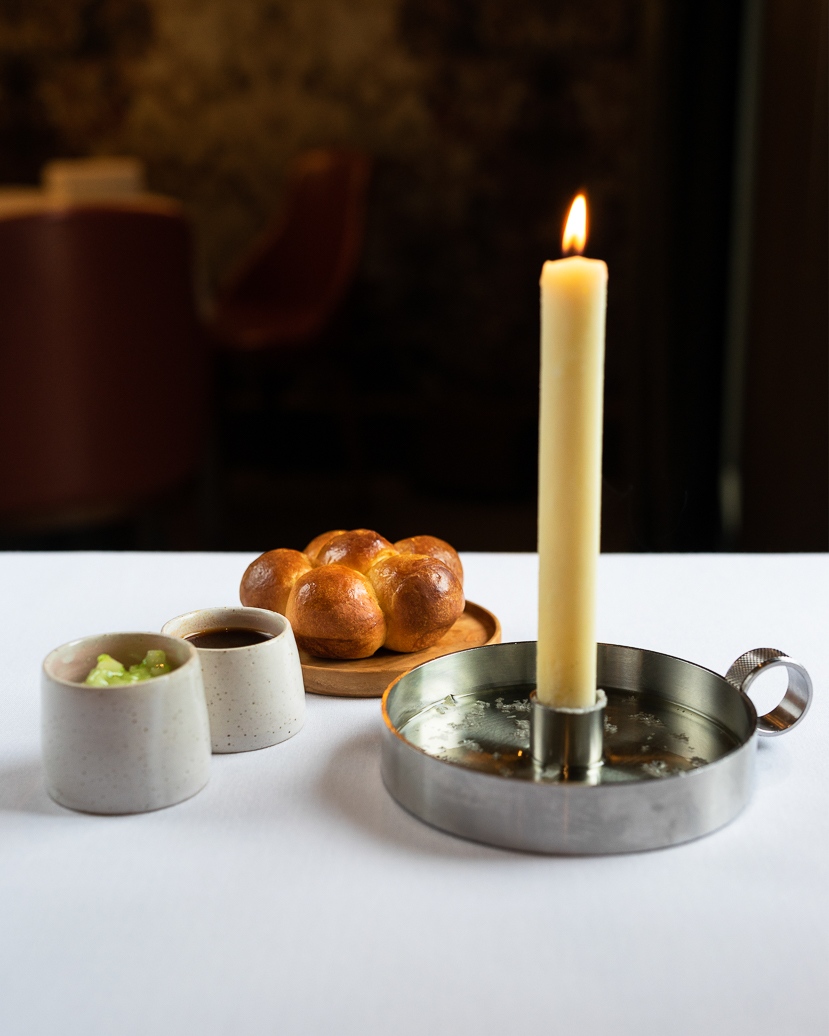 My next kitchen professor was the equally-lauded Tom Sellers at Restaurant Story, where, accompanied by a playlist of the chef’s favourite tracks, I was treated to several uber-inventive creations. Standout, boundary-stretching originals included a candle constructed from beef extract such that as it melts, the diner may mop up the unctuous goodness with fluffy parker house rolls, and a unique finale titled Paddington Bear—a decadent combination of foie gras, cardamom, and marmalade evoking powerful memories of adolescence with the addition of an adult temptation. 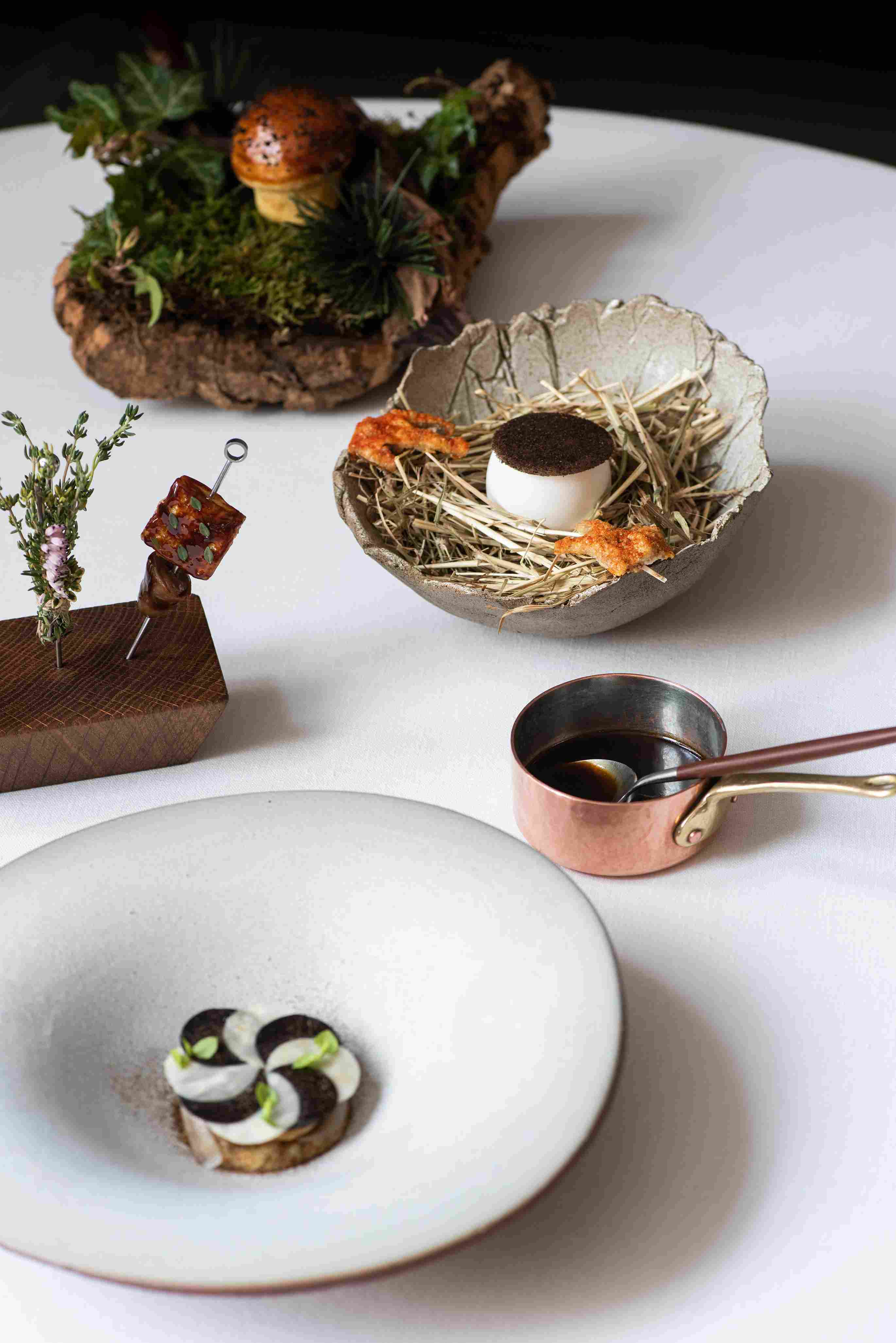 My last stop on this epicurean extravaganza was the trail-blazing Da Terra by Rafael Cagali, whose experimental cuisine has seen the chef deservingly acknowledged as a culinary perfectionist. His dishes are triumphs of restraint combined with technical excellence: a chicken preparation of wings, liver, foot, and yolk, with celeriac and Perigord truffle; a stunning sourdough presentation including bone marrow, cultured butter, and olive oil; an extraordinary baba of cachaca, pistachio, and N25 Kaluga hybrid caviar.

On returning to Thailand, I reflected that, with the arrival of the Michelin Guide and the soon-to-be-launched Thailand’s Favourite Restaurants by Koktail, Thailand has undoubtedly acquired a global focus as a true gastronomic destination. A number of new ventures, launched by both Thai and non-Thai chefs, commit to the development of revolutionary new dining concepts, challenging traditional culinary boundaries in a concerted drive deserving of recognition. To operate successfully at this end of the spectrum is risky and requires a deep understanding of produce, flavour, and combination. 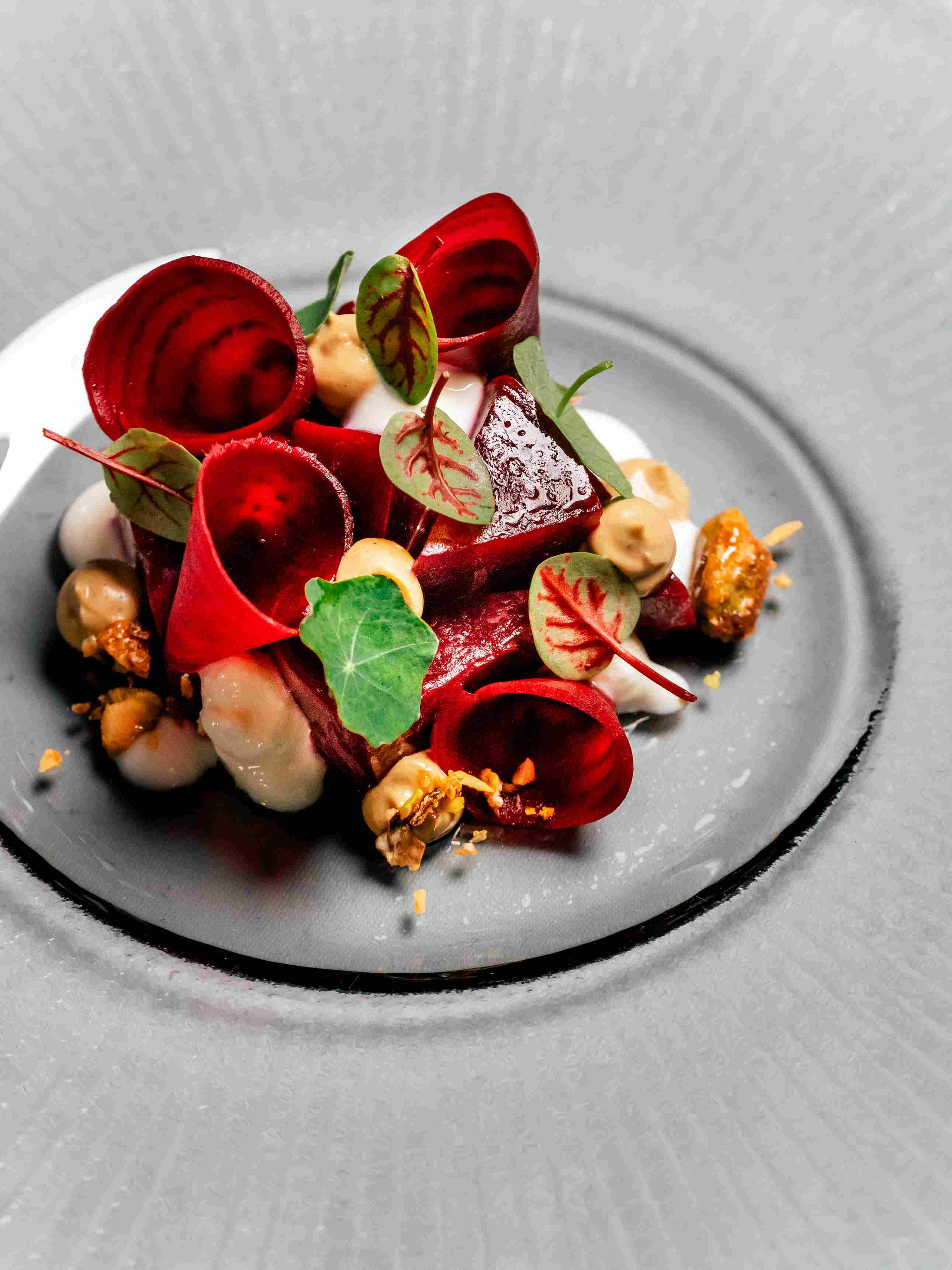 Beginning in Bangkok, Cadence by Dan Bark offers “progressive American personal” cuisine. With a non-traditional background earned in accoladed restaurants throughout Chicago, chef Dan’s menus feature incredibly clever combinations of textures and flavour profiles. A perfect example of this is his beetroot dish, composed of a meltingly-tender duck confit with a rich, slightly salty flavour, accompanied by goat cheese and pistachio. Chef Dan moves effortlessly from the complexity of a reinvented classic such as Hokkaido scallop with 48-month-cured Iberico, kale, finger lime, and a drizzle of XO, to the simple intelligence of “Home”, comprising winter truffle, potato, and chorizo. Desserts are equally stellar: a crème caramel dialled up with the masterful additions of parmesan, fig and balsamic, and the highlight “Old Fashioned”—a memorable combo of whisky, 74 percent dark chocolate, blood orange, and toasted rice. To dine at Cadence is to experience a progressive culinary journey packed with dishes which generate emotion. Chef Dan has very much made this niche his own.

Remaining in Bangkok, Potong is chef Pam and Khun Tor’s monument to progressive Thai-Chinese cuisine in Yaowarat. The impressive, sympathetic conversion of their ancestral home—a former apothecary—serves Pam’s rotating menus of elegant, powerfully-flavoured takes on classic recipes. The current journey begins on the establishment’s roof with a bite and kombucha, before a visit to the kitchen to consume a delicate flavour bomb of pig brain. Once seated, an experiential opening course celebrates the humble corn via a mind-blowing mousse with sunflower truffle vinaigrette and a silky-smooth smoked ice cream, accompanied by scenes of chef Pam and her family in vintage countryside movies, enabling the diner to enjoy a true sense of place. A new dish of mud crab with crab fat, black pepper gel, and mushroom butter toast invites the diner to form the ingredients into a sandwich. Her latest palate cleanser is a combination of childhood favourites Yakult and Pipo, the former represented in ice cream, the latter by three punchily flavoured fruit jellies showing her unrivalled level of creativity. This is indeed cooking on the edge!

Further south on the island of Phuket is Jampa, a recent venture by the Montara Hospitality Group. Montara has a well-earned reputation for leading-edge dining concepts, including the Michelin-starred Pru. In its idyllic setting within a wellness community, Jampa cuts a striking silhouette, designed and furnished by award-winning practitioners to utilise local wood, maximise natural light, and become part of the landscape. Inside, Jampa reflects its sustainable focus with 100 per cent local ingredients and the deft application of fire and smoke to allow these products to shine. The creator in charge of this mission is the talented Dutch chef Rick Dingen. Menu highlights include a memorable flat bread with coconut heart and Thai tomme de chevre, a sublime local cobia accompanied with papaya and chef Rick’s secret “leche de tigre” marinade, and his octopus with capsicum and gremolata. The hits continue with a dessert of barbequed mulberries accompanied with a rosella granita and yoghurt sorbet—a textural masterpiece. To finish, Chumphon 70 per cent chocolate combined with Phuket pineapple is elevated with the inspired additions of ginger and Thai basil. 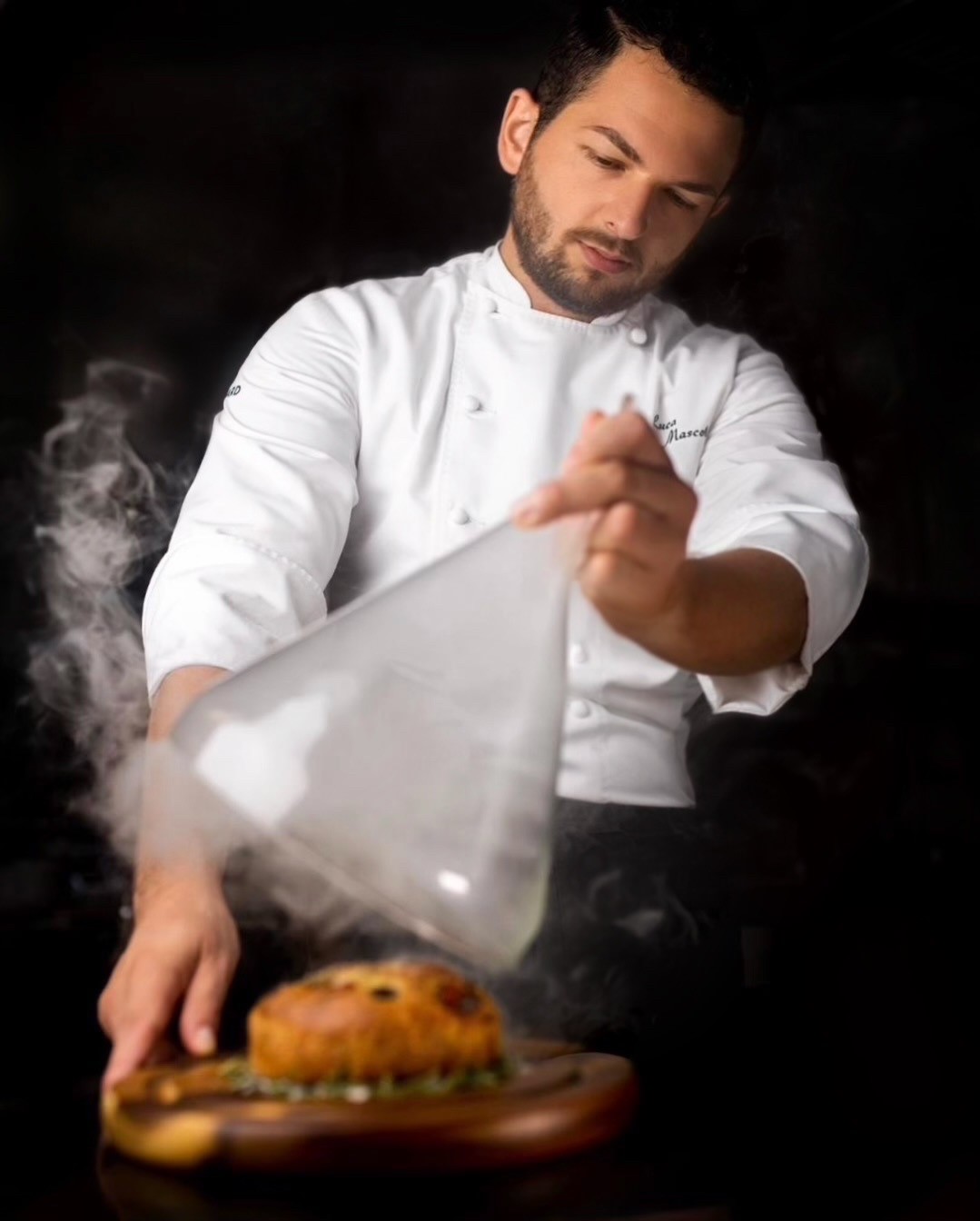 Dramatic unveilings at The Smokaccia Laboratory

Not far from Jampa lies The Smokaccia Laboratory, which recently burst onto the Phuket culinary scene from the minds of dynamic duo Luca Mascolo and Brigitta Houkamp. They are ably supported by Massimo, who leads service and their upcoming evening chef’s table. Their current fine dining experience centres around a 100 per cent sourdough, fermented for 50 hours before being cold-smoked with hickory wood chips and Italian herbs, resulting in an ethereally fluffy, cloudlike bread which melts in the mouth. Chef Luca’s menu combinations have been painstakingly researched with a focus on premium local ingredients partnered with unique Italian accompaniments, maintaining authenticity.

A signature Smokaccia bun arrives filled with crunchy local fish, river prawns, and Thai basil mayo, followed by another boasting 24-hour low- and slow-cooked organic pork belly with Tomina di Capra goat cheese, and a third containing Thai rock lobster, horseradish, and green apple emulsion. The unforgettable “Surfing Wagyu” furnishes the Smokaccia bun with A5 MB 6/7 Wagyu beef, Surat Thani oyster, plankton marino emulsion, and seaweed caviar. All are accompanied by Italian ketchup, a six-hour reduction of cherry tomatoes with white balsamic and garlic, house-made oils, and a heavenly mortadella Bologna DOP foam. His support of local artisans is evident with a Thai lavender and Klong Loi white chocolate vegan crème brulee, torched tableside, utilising a cocoa pod from Prachuap as the elegant serving bowl. The bean and husk, meanwhile, are kept aside for an “a la moment” tiramisu, echoing his passion for zero waste. Watch out for a five-year parmesan ice cream with fifty-year balsamic!

In Chiang Rai, Locus Native Food Lab, helmed by chef Kongwuth Chaiwongkachon, creates a theatrical mini-auditorium with chef Kong as gladiator, alternating between narrator and cook. Ten lucky diners receive dishes from a team of chefs, whilst seated at a V-shaped chef’s table acquired from an opera house. The menu changes every two months, with the exception of “Amethyst”, a genius dessert of bualoy, krong krang, and thapthim krop. Chef Kong uses 100 per cent local ingredients, preserving the traditions of Northern Thai and Lanna culture through dishes crafted with global techniques and influences. Dishes of note include a juicy organic chicken with nam prik ong and a silky yet punchy espuma of pumpkin curry with baked vegetables, pickled beets, and royal project feta cheese. A recent frittata of sengda (a seasonal bitter vine) with corn salsa and pla-salid (salt-cured freshwater fish) was perfectly executed, packed with unique flavours. Chef Kong completes the occasion with a carefully chosen soundtrack and on-point wine pairings. Locus will stretch your culinary boundaries.

Whilst these chefs are treading the path to ensure Thailand continues to build its global reputation for culinary creativity, let’s together acknowledge many other, equally talented chefs who are contributing to Thailand’s abundance of diverse culinary offerings every day. One chef does not alone succeed; great chefs are blessed with supportive brigades, restaurant leaders, sommeliers, and teams that together make the experiences we enjoy truly memorable.